This may have been one of the busiest months by far for me in New York City Real estate.  For all of you {real estate} life addicts like me below are the most recent of tasteful, family-friendly breed new development that are selling really quickly and to come to market:

One of my favorite new developments is the Sterling Mason by Taconic Investment Partners.  I was thrilled to be invited for an exclusive first look at the Sterling Mason.  It’s in prime northwest Tribeca—the south side of Laight between Greenwich and Washington— the building will end up being architecturally noteworthy late fall 2014.

Done by Architect Morris Adjmi leaving  401 Washington alone, while creating a new building to the east (412 Greenwich, formerly a garage) that mirrors its partner; the address for the combined duo will be 71 Laight.  The Mason façade is terra cotta, while the Sterling façade will be grayscale and metallic-looking.  The first floor will be cast aluminum and the floors above will be a cement composite or reinforced concrete panels with a metallic finish.

The 96,000 salable square feet have been divided into just 33 apartments with two to five bedrooms; there are three penthouses—one simplex and two duplexes, with four to six bedrooms each.

The Juliet balconies in the floor plan look out onto the 40-by-60-foot interior courtyard, designed by Deborah Nevins.  Windows on the courtyard have sliding metal shutters that reference Tribeca iconography.

I was in complete awe to meet,  John and Christine Gachot, who have worked extensively on André Balasz’s projects, designed the interiors.  The Gachots enlisted Henrybuilt for the millwork; this is the first time Henrybuilt agreed to participate in a project of this size.  It has a herringbone floor, radiant floors, and Lefroy Brooks fixtures.  My favorite Manhattan bathroom by far.

There are two elevators for the 33 residence. a live-in residential manager, a library lounge with dining area and kitchen facilities, an exercise room with yoga space, a programmed children’s playroom, and a self-park garage with 12 spaces and an entrance on Greenwich.  For more details contact me at claudia@townrealestate.com. 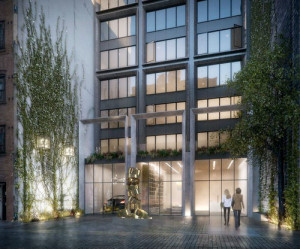 Every home is inclusive of an open chefs kitchen that is well thought out for every day living and entertaining. The kitchen’s include Poggenpohl cabinetry, an integrated Subzero refrigerator and Bosch stove, range and dishwasher. Every residence offers luxurious, spacious bathrooms with hand-laid imported marble and 5 inch plank oak hardwood floors throughout. 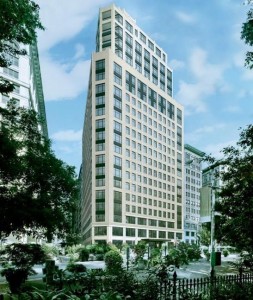 I can remember when I first started my real estate career Madison Park was not what is today in 2001.  Now it’s one of the most coveted areas to live in.  Now with a  few million for a three or four-bedroom condo in a new development, put in an application at Avenues and call it a day. “Downtown” is no longer a lifestyle descriptor, but a geographic one as quoted in the New York Observer.

10 Madison Square West, formerly known as the Toy Building, a 125-unit conversion at 1107 Broadway. I have been bringing many of my clients to the sales gallery featuring a fully built-out bathroom and kitchen—the new units will be both large (one-bedrooms to five-bedrooms, plus penthouses—no studios,) and unobjectionably styled. The interiors and finishes by Alan Wanzenberg were described, aptly, by one attendee, as “very safe.”

The building straddles the uptown and downtown markets. Mr. Wanzenberg also designed the interiors of the very popular 150 Charles Street, which like 10 Madison Square West, is being developed by the Witkoff Group. Carrara marble, white porcelain tile, stainless steel fittings and wide-plan oak can be expected in abundance. The kitchens will have both gas and induction burners—a belt and suspenders approach to a stove top if we ever saw one. Man can live on Seamless alone, but it’s nice to at least pretend that he doesn’t.

Prices are expected to range from approximately $1.5 million to $25 million.

Was one of the first large commercial buildings in Noho, where it played host to the Schumacher & Ettlinger printing company beginning in the 1860s.  The 7-story factory is in the middle of its conversion into lofts, The Schumacher’s building will contain 20 two- to four-bedroom apartments priced from about $3 million to $25 million. Arched windows, 10’5″ to 15′ barrel vaulted ceilings, etc. The whole thing, developed by Stillman Development International

This is one of the truly most exceptional properties the area NOHO with it’s edgy can artistic vibe has delivered.

The Schumacher, a 21-unit loft condominium conversion at 36 Bleecker Street in Noho, has officially launched sales Contracts for 10 of the units, which will be ready for move-ins by September 2014

Architect Morris Adjmi is working to restore the building’s 20-foot-high Queen Anne-style pediment that was destroyed in the 1920s, Stillman said.

The units will feature barrel-vaulted ceilings and arched windows. Amenities planned for the building include a central courtyard from Ken Smith, a roof garden designer with the Museum of Modern Art, and an art program curated by Soho gallerist Cristina Grajales.  Truly and Artists lovers dream….

An amazing development that was purchased by hotelier Andre Balazs and Charles Blaichman where there used to be a garage will be 500 W21st street new development, now owned by Sherwood Equities who waited for the market to get on fire as it is now.  the Times reports that another new condo building along the High Line broke ground last month. Designed by Kohn Pedersen Fox, a rendering of the exterior has been unveiled (taaa daaa, above), which is decidedly low-rise at only 80 feet tall and architecturally tame compared with some of its edgy, metallic West Chelsea neighbors. Details have also emerged about 500 West 21st Street’s 32 luxury units, which will be spacious, and marketed at families, with many around 4,000 square feet. The apartments are expected to sell for about $2,500 per square foot, which would trump current records in the $1,500/square foot range (with the exception of Jean Nouvel’spricey pads, which are in Sherwood’s ballpark.