Economics and The Market

Year-over-year, manufacturing, government and financial activities sectors all shed jobs, while the primary industries contributing to job growth  were educational & health services, professional & business services as well as the leisure and hospitality services.

The S&P 500 fluctuated around the 1,850 mark and the 30-Year Fixed Rate Mortgage increased slightly to approximately 4.33%. The Federal Reserve has continued incremental reductions in its current bond buying strategy as planned, facilitating a gradual tapering of the quantitative easing policies. It should be interesting to see the interplay between interest rates and asset prices through 2014.  The following chart demonstrates fluctuations in the S&P 500 Stock Index as well as the 30-Year FRM on a weekly basis from 2010 through April 2014. 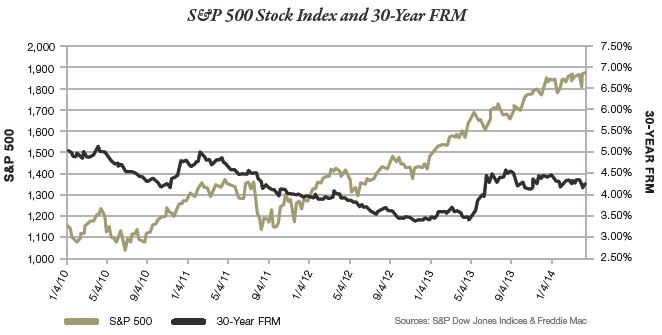 Another important indicator for the state of the economy is the number of building permits. For the month of March there were 1,809 building permits issued in Manhattan YTD, a significant increase from the same period in 2013, however still not at pre-recession levels.

While the economy has been growing at a rate that is slower than desired, it has shown signs of improvement in numerous sectors including residential real estate. Simultaneously, recent Census reports posted by the Untied States Department of Commerce suggests that the most recent privately owned housing starts have increased 2.8% month-over-month while decreasing year-over-year.

The following graph depicts the number of building permits issued on a month basis alongside the New York City unemployment rate on a monthly basis from January 1996 through March 2014 covering several periods of economic fluctuations.