Sayre Park was the happeningest place in the Hamptons Saturday night as co-host of Food Network’s The Kitchen Katie Lee and Michael Symon of ABC’s The Chew hosted Dan’s Taste of Two Forks, presented by Farrell Building Company.

TOWN Residential, was proud to serve as the platinum sponsor of Dan’s Taste of Summer – The East End’s premier food and wine events.”The Hamptons has always been near and dear to our firm. Many of our clients and customers live and play here and we love to be here, too,” said Andrew Heiberger, founder and CEO of TOWN Residential, who attended the weekend’s events with more than 150 TOWN Ambassadors. 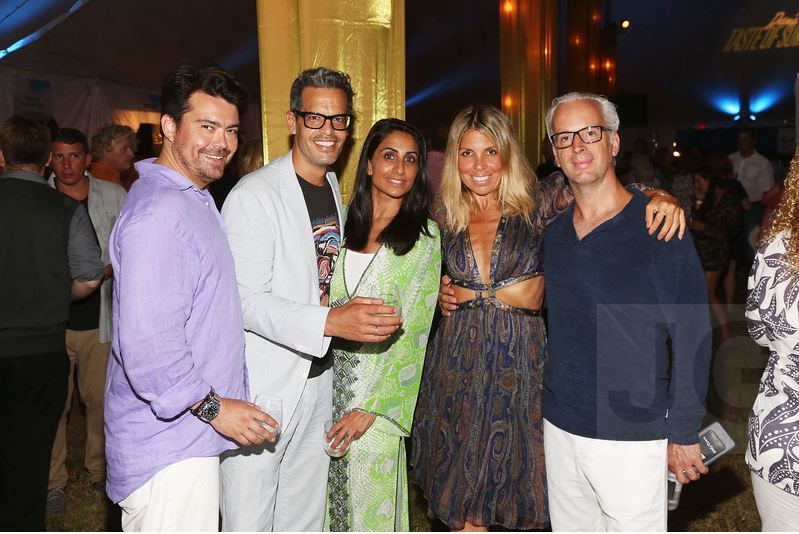 Real Housewife of New York City Kristen Taekman and husband John Taekman, who had been to GrillHampton the night before, snuck in after 9 p.m. The pair had been party hopping all night long and were ready for dessert. John graciously helped guests, like News 12’s Elisa DiStefano, take pics with friends near the dessert tables. As they went back for thirds on Joe and Liza’s scrumptious peach pie ice cream Kristen declared, “Oh my God, this is so good!” The couple will spend two more weeks in the Hamptons before headed out to Los Angeles. 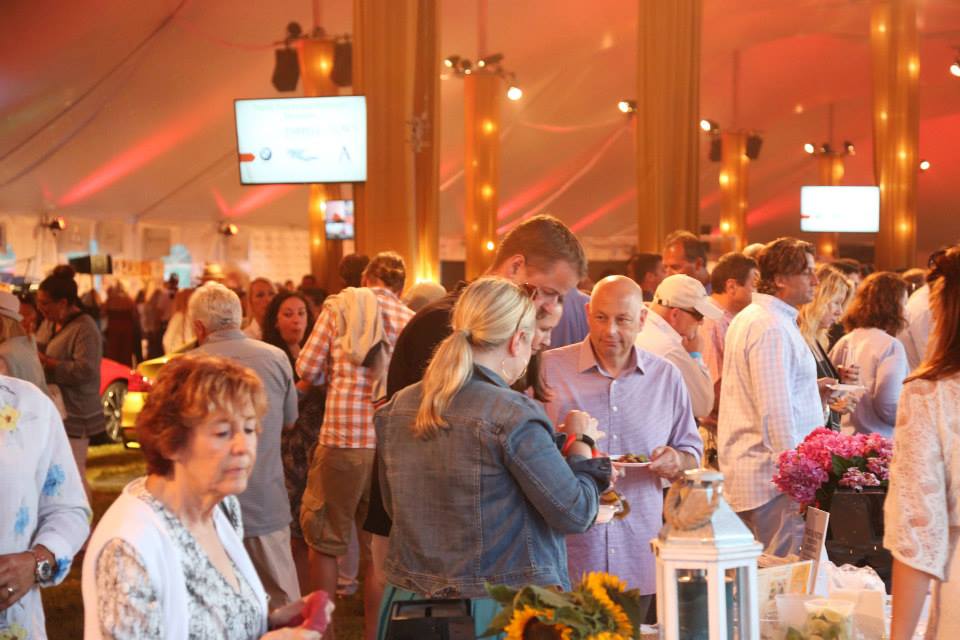 Executive Producer of Live! With Kelly and Michael and GrillHampton judge Michael Gelman was back for seconds at Taste of Two Forks. On the red carpet with his wife Laurie Hibbard, Gelman announced “I came hungry!” Laurie joked that he had spent 6 hours that day working off all he had eaten the night before.

Architect turned Dan’s Papers red carpet correspondent for the night Peter Cook took his time before Taste of Two Forks began to chat with chefs and vineyard representatives making a list of go-to noshes and libations. He chatted it up with Rocco Carriero, of Ameriprse Financial Services, saying that if the architect thing doesn’t work out, being a reporter for Dan’s Papers was his back up plan.

All good parties end up in the kitchen and that’s where we spotted Joe Farrell, presenting sponsor with his company Farrell Building, and Gary Cuiffo, of Cuiffo Cabinetry. Both enjoyed Taste of Two Forks with friends and family. The Sub-Zero fridge wasn’t just for show we found out, it was well stocked with water, Polar Seltzer, and Bai drinks. Wait staff kept the food–including oysters and tuna tartare–coming all night long so these designing men didn’t have to leave the party.

Not that there was enough food, guests behaved like kids in a candy store while charging up at the Town Residential tables. Oversized candy jars filled with lollipops, Lemonheads, and more were there for the taking. More than one person was spotted in the party giggling with a big bag of candy. 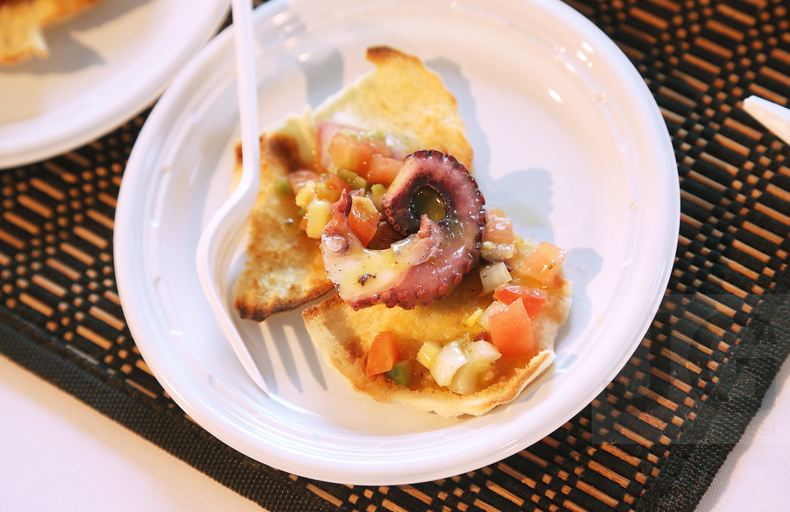 Guests flocked to Bistro 72 for seconds and thirds as Chef James Junk offered up duck confit on an edible spoon. SO. GOOD. And a few feet away, Red Stixs Chef Skinny Mei was serving delicious chicken satay with peanut sauce. Dan’s Papers PopHampton columnist Lee Meyer exclaimed, “I could spend my entire night alternating between Red Stixs and Bistro 72!”

Honoree B. Smith took the stage in fabulous fashion and delivered a lovely speech about her career and the restaurant community. 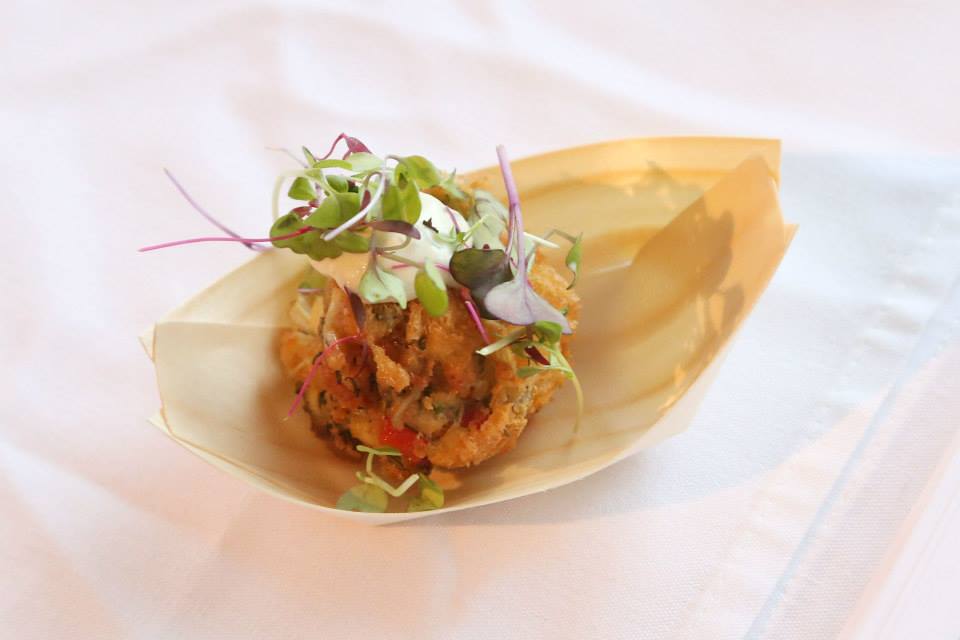 Hardcore foodies were excited to spot esteemed food critic Gael Greene in the crowd, enjoying various dishes and treats. The 81-year-old foodie pioneer was just as sassy and lively as ever. Several wineries were present, giving guests a “taste” of Harvest East End, our August 22 food and wine event on the North Fork. Don’t miss it! “I was a little sleepy, so I had two delicious coffees from Hampton Coffee,” remarked co-host Michael Symon when asked what his favorite dish of the night was. Overheard at 668 The Gig Shack: “Are you here to try our crab-tasting crab cakes?” Yes, everyone was!

Many restaurants offered more than just a “taste;” some brought a whole meal! Bistro 72’s duck confit on an edible spoon was a crowd-pleaser, as was the Long Island lobster roll from Tillie’s at Gurney’s Montauk. 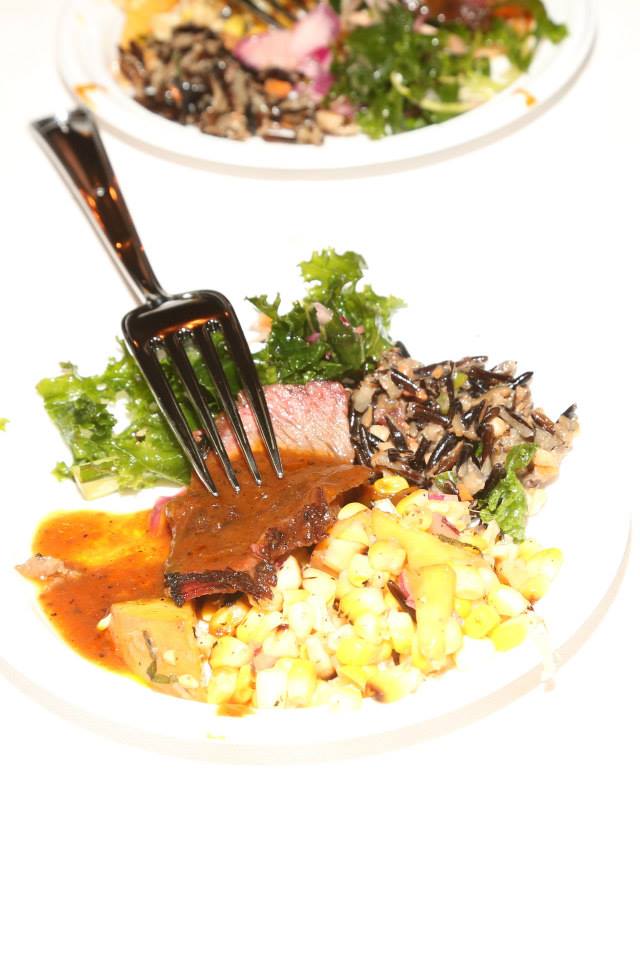